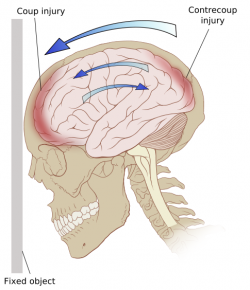 According to MedlinePlus (the National Institutes of Health’s Web site) every year, millions of people suffer a head injury.

But the danger is that so many head injuries can be difficult to recognize.

When people have suffered a head injury, which is often used synonymously with suffering a traumatic brain injury, these people and families, and often even the treating doctors don’t realize it until much too late.

The most common scenario I see as an injury lawyer is when people are injured in car accidents. Let’s say you’re in a car accident where your vehicle was struck from behind. While you might not have any visible signs of trauma such as blood, gashes, bruising or swelling to your head, that impact may have caused your brain inside your skull to suffer injury. There are sharp bony ridges and prominences within the skull that your brain literally can crash into, causing diffuse axonal injury to your brain. This can develop into a very serious traumatic brain injury.

MedlinePlus provides some of the most common symptoms of serious head injuries:

If you’re having any of these symptoms, you should contact a medical professional immediately. The steps you take immediately following a head trauma can play a huge role in the long-term outcome for the person who suffered the head injury.

Some people, especially men, may resist advice to seek medical attention following a serious head injury. Unfortunately, this resistance can significantly affect chances of making a full recovery and minimizing the long-term damage from a head injury. Also, medical treatment for people who have suffered a head injury can be expensive, and sadly many insurance companies will contest incurred bills for medical treatment if there has been a long delay between the date of trauma and when they have received medical care.

Head injuries resulting from car accidents pose special dangers. These can range from problems with your auto insurance for necessary medical care to the “masking” of many symptoms of head injury due to strong pain medications while attention is focused on more obvious, physical injuries.

Anytime you have been injured in a car accident and suffered any type of trauma to your head or violent whipping of the head back and forth that caused you to lose consciousness, become dazed or confused, you should be examined by a medical professional as soon as is possible.