NHTSA administrator announces: ‘ [E]very child on every school bus should have a three-point seat belt’ 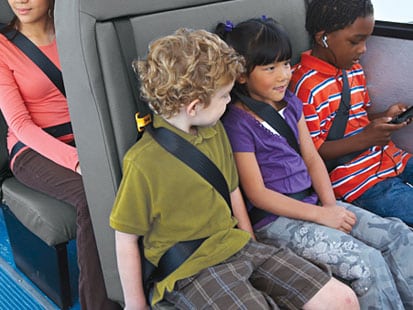 Children are our most precious “cargo” when we’re out on the roadways.

Nice to see the nation’s top traffic safety organization now agrees, and after years of debate and some controversy (stemming from a 2006 position paper on seat belts in school buses), the National Highway Traffic Safety Administration (NHTSA) is now announcing that our kids should have the same protection whether they’re in the family mini-van or on the school bus and headed off to class.

In a November 8, 2015, speech to the National Association for Pupil Transportation, the head of the National Highway Traffic Safety Administration (NHTSA), Administrator Mark R. Rosekind, said children should be wearing seat belts while riding on school buses.

During my own career as an attorney helping people injured in Michigan auto accidents, I’ve seen (and litigated) many school bus accidents. It’s time for all of us to understand and appreciate the tragedies that can result from young children as vehicle occupants in school buses not being properly seat-belted.

This is a great – and, frankly, long-overdue – move by NHTSA.

As pleased as I am as an injury attorney with NHTSA’s announcement, Rep. Robert L. Kosowski (D-Westland, MI) must be even more pleased.  In January 2015, Rep. Kosowski introduced House Bill 4020, which proposed the following regarding seat belts in school buses:

“A school bus purchased by a school on or after the effective date of the amendatory act that added this section shall be equipped with 1 safety belt for each pupil being transported by the school bus.”

Hopefully, NHTSA’s announcement will get a fire going under Michigan lawmakers: No action has been taken on Kosowski’s HB 4020 since it was assigned to the House Transportation and Infrastructure Committee on January 15, 2015.

NHTSA Administrator Rosekind acknowledged this marked a change in the association’s position on the need for seat belts on school buses:

“Is this a change in position? Yes.”

In a 2006 paper, NHTSA said the following in response to the question, “Why don’t we have [seat belts] on school buses?”:

“School bus crash data show that compartmentalization has been effective at protecting school bus passengers. NHTSA’s 2002 Report to Congress found that the addition of lap belts did not improve occupant protection for the severe frontal impacts that were studied for that report.”