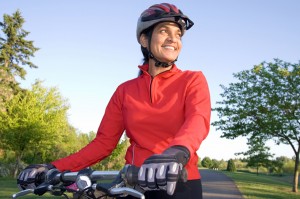 I read a recent article in Bicycling Magazine called “Senseless”  by Bruce Barcott. This isn’t just any quick hitter article on bicycle safety or on the importance of wearing bike helmets. In search of whether bicycle helmets truly do protect against the risk of concussion and brain injury, Barcott took an entire year and toured helmet labs, interviewed brain researchers and government regulators, and pored over the medical journals and archives on the subject.

He says what he found was very troubling:

“Bicycle helmets do an outstanding job of keeping our skulls intact in a major crash. But they do almost nothing to prevent concussions and other significant brain injuries — and the very government agency created to protect us is part of the problem.”

Barcott used his friend Sheilagh Griffin’s concussion from a bicycle accident as an example. During a recent race, she lost control and flew over the handle bar. Griffin was wearing a helmet, yet was diagnosed a concussion.

Through his research, Barcott found helmets are great at softening rare, catastrophic blows to the head. But surprisingly, there is no standardized or agreed upon test to prevent concussions and brain injury from more common bike accidents, such as those that happen at slower speeds but that can still result in concussion to the rider.

The post-crash state of Sheilagh’s helmet illustrated the problem, according to Barcott’s article. Sheilagh said the helmet didn’t appear to be damaged at all, aside from a “little dent in the front of the shell, and another one on the back right side.” Those marks indicate that the helmet protected her skull. But the liner remained intact, meaning a significant portion of the impact energy was absorbed not by the helmet, but by her brain, Barcott said.

The certifying authority for bicycle helmets in the U.S. is the Consumer Product Safety Commission (CPSC), which is a federal agency that sets out minimum standards to protect consumers against unsafe helmets.

But helmet standards haven’t been updated since 1999. And our understanding of the risks and dangers of brain injury has increased significantly since then. CPSC officials, according to Barcott, are stuck between efforts to strengthen helmet standards and therefore push companies to design and manufacture helmets that offer both kinds of protection. Barcott said although no officials would go on record, one high ranking official told him the agency is aware of the concerns over concussion and brain injury.

To update their 1999 standard, the CPSC is required to meet an “expensive set of cost-benefit requirements that go far beyond that of any other government agency.” For instance, “if an incremental safety improvement results in higher manufacturing costs, the realized value of the improvement must outweigh those costs,” Barcott wrote. “Preventing a theoretical number of concussions—that’s an extremely hard dollar value to prove.”

But all hope is not lost in bicycle helmets protecting your brain – and going further than just keeping your skull intact, Barcott says.

In late 2012, a company called 6D, co-created by bike designer Robert Reisinger, introduced a rotation-dampening motorcycle helmet with what it calls “omnidirectional suspension.” Reisinger’s data says that the helmet brings down rotational acceleration just on the threshold of concussion. In other words, the helmet helps suspend the brain. The first 6D motorcycle helmet went on sale in February, and a bicycle version may (hopefully) follow within a year or two.

And now, the first generation of concussion-dampening bike helmets is finally hitting stores in the U.S. The popular Scott brand brought the “MIPS-equipped” Lin helmet to stores this spring. MIPS stands for Multi-directional Impact Protection System, and it contains a low-friction slip plate between the head and EPS liner. On impact, the helmet rotates independent of the MIPS liner, absorbing some rotational acceleration, according to the article.

The MIPS system was designed by a Swedish neurosurgeon Hans Von Holst, who was tired of seeing helmet-wearing bicyclist patients with brain injuries from bicycle accidents. Von Holst noted that the head has a built-in protection system — a low-friction layer of cerebrospinal fluid between the brain and the skull. The fluid allows the brain to move a bit and acts as an energy absorbing system. With that in mind, the MIPS helmet mimics that life saving action that is built in our brains.

So although federal bicycle standards haven’t been updated in more than a decade, and there are no helmet tests for concussions, the private sector seems to be responding.

And bicyclists can speak up with their wallets. Although the new MIPS bicycle helmets cost about $50 more than the average government approved helmet, they are one step forward to protecting yourself against concussion and brain injury.

As an auto accident lawyer, I’ve handled many bicycle-car crashes. And in the past 5 years, I’ve become involved in the Michigan triathlete and competitive biking communities, representing many triathletes hit by cars and trucks. I can say with certainly that bike helmets save lives. I have seen it firsthand in my own law practice with the people I’ve helped.

But we can all take it a step further, and hopefully well before this ends up in a lawyer’s office. We can start by being our own safety advocate when we go out on the road with our bikes.

How to fit a  bicycle helmet

One Reply to “Do bicycle helmets really protect against concussion and brain injury?”