The Michigan auto insurance industry’s same old, unsubstantiated and inaccurate justifications for “reforming” or “dismantling” Michigan’s No Fault auto insurance system don’t sound any newer, more plausible, more believable or more accurate when they’re delivered by Gov. Rick Snyder at a press conference – in the company of the Republican chairs of the House and Senate Insurance Committees and Michigan’s Insurance Commissioner.

When tested against the facts, the auto insurance industry’s No Fault reform spin is just as unpersuasive and misleading as it has always been.

Below is the spin and the facts so you can judge for yourself. For more information, click here to read a comprehensive analysis of Michigan No Fault reform and the latest developments.

SPIN:No Fault reform will save Michigan auto insurance consumers $125 per vehicle in “year one.”

FACT: In return for the indefinite, “for-the-foreseeable-future” elimination of unlimited, lifetime No Fault medical benefits which could be worth millions and millions of dollars, Michigan auto insurance consumers have the Governor’s word that they will save $125 for a year.

It’s just as crazy as it sounds.

In its editorial entitled “Gov. Snyder’s auto insurance reform offers little savings to drivers,” the Detroit Free Press said that “in exchange for these paltry savings, Snyder would dismantle a safety net that is the best in the nation,” adding that “Snyder offers no evidence to suggest that this reform would result in any significant reduction in costs for Michigan drivers.”

The Detroit Free Press is “right on the money,” both figuratively and literally.

During his press conference, when talking about the savings that consumers may be able to expect from No Fault reform, he repeatedly emphasized that the savings he was promising were only for “year one.”

Beyond that, neither the Governor – nor the lawmakers who would ultimately introduce a No Fault reform bill nor the Insurance Commissioner – would guarantee a thing.

However, when the conversation turned to the topic of their proposed cap on Michigan’s No Fault medical benefits, there was no more talk about a “year one” limitation, nor was there any other discussion about a temporal limitation on the elimination of Michigan’s guarantee of unlimited, lifetime No Fault medical benefits for catastrophically injured auto accident victims.

Below are more of the highlights from the Detroit Free Press’s editorial criticizing Gov. Snyder’s promise of savings from Michigan No Fault reform:

“Snyder’s proposal, announced Thursday, would save each Michigan driver $125 a year. That’s $10 a month. And in exchange for these paltry savings, Snyder would dismantle a safety net that is the best in the nation.”

“But Snyder offers no evidence to suggest that this reform [capping Michigan No Fault medical benefits which are unlimited for the lifetime of catastrophically injured auto accident victims] would result in any significant reduction in costs for Michigan drivers.”

“And there is evidence aplenty to suggest that eliminating unlimited care for catastrophic injuries could have a devastating impact on Michiganders.”

“Capping benefits at $1 million would affect a small number of people. But those dollars could mean the difference between a lifetime of invalidism and rehabilitation and a return to functionality. Moreover, the data that would justify such changes haven’t been made public. That’s where this needs to start. If the MCCA is unsustainable, if that system truly needs reform, if Snyder’s proposed changes could bring the cost of auto insurance down by more than $10 a month, show us the numbers. Then we’ll talk.”

SPIN: Gov. Snyder said that “Michiganders have seen their auto insurance rates rise faster than any other state in the country.”

According to data from the National Association of Insurance Commissioners (NAIC) which is relied on and reported by the Insurance Institute of Michigan, the average automobile insurance premium in Michigan was lower in 2010 than it was in 2003, 2004, and 2005:

Similarly, data from the Insurance Information Institute showed that the average Michigan auto insurance expenditure, i.e., “what [Michigan] consumers actually spend for insurance on each vehicle,” was lower in 2010 than it was in 2003 and 2004.

For more information, check out “The truth about Michigan auto insurance rates.”

FACT: The experience of other No Fault states proves that Michigan’s No Fault medical benefits are not to blame for the prices that Michigan auto insurers choose to charge.

According to data from the IIM (which was also used in one of Gov. Snyder’s exhibits at the press conference), Michigan’s average annual auto insurance premium is $1,073.

For more information, check out: “The Insurance Industry’s Top 4 Myths About Michigan No Fault Insurance Reform.”

Here’s the chart that Gov. Snyder used in his press conference: 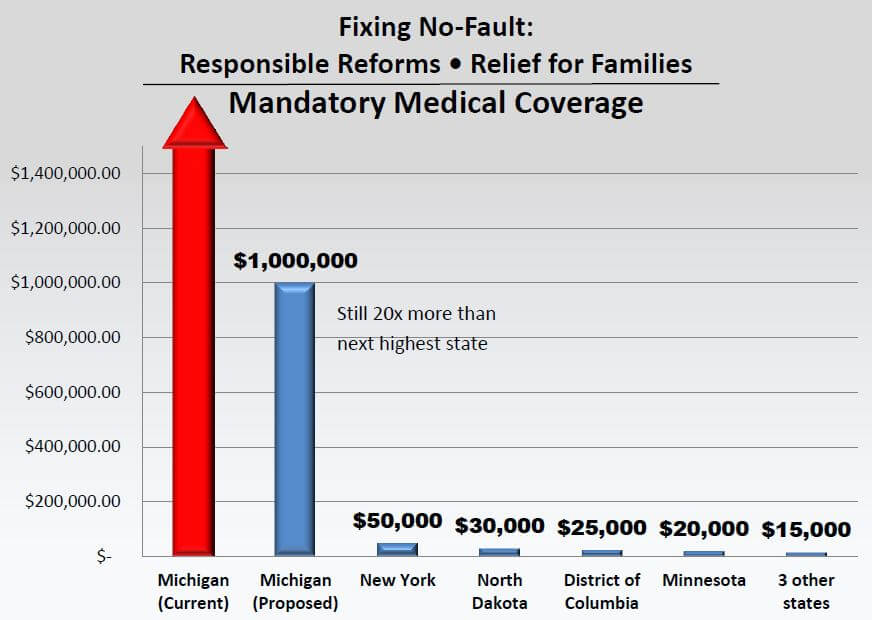 SPIN: Auto insurance prices in Michigan are exorbitant when compared to the prices in neighboring states, such as Illinois, Indiana, Wisconsin and Ohio.

FACT: This is not an “apples to apples” comparison because Michigan is a No Fault state, yet the other states are “tort liability” states.

FACT: The negatives of “tort liability” systems, which are notorious for causing long delays in getting medical treatment, necessitating high-volume, costly lawsuits and slow handling of claims for accident-related medical benefits, are what prompted Michigan to convert to a No Fault system 40 years ago in 1973.

Recent comments by a spokesperson for the Insurance Information Institute (III) provide the proper perspective for considering the auto insurance price differential between Michigan and the other four states, all of which rely on tort systems for resolving auto accident-related medical benefits claims.

In an interview with the South Florida Sun-Sentinel about the possibility of Florida dropping its No Fault auto insurance system and going to a tort system, the III spokesperson identified the following “negatives for the consumer”: slower handling of claims; delays in getting medical treatment; and, “[t]here is likely to be more lawsuits.”

It is “incomplete, inequitable, inefficient and slow” and it does “a poor job of providing for seriously injured auto accident victims.”

It had an “inequitable payment structure” because a “high percentage of persons injured in automobile accidents received no reparations under the tort system” and the system “systematically undercompensated the most seriously injured” victims.

As such, given the “long payment delays,” “[s]everely injured people [were forced] to bear devastating financial burdens while waiting for lawsuits to be settled.”

Is the MCCA committing a massive fraud upon us?

Virgil Smith’s No Fault reform bill is irresponsible and unrealistic