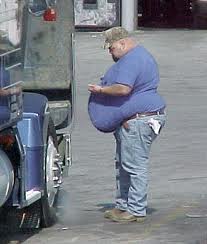 On November 27, I received a comment from a truck driver named Tom after my blog about the New York Times article that overweight truckers account for 13 percent of fatal truck accidents.

Tom wrote in: “I am fat. I have severe obstructive sleep apnea, I also sleep using a CPAP machine. I am also a diabetic truck driver and with high blood pressure.”

But Tom also went on to blame poor driving decisions that motorists make around trucks as the real cause of many truck accidents (more on that in a moment).

I was thinking of Tom and his comment, because last week there was a meeting between medical and safety groups and the Federal Motor Carrier Safety Administration (FMCSA) on the dangers that overweight and obese truck drivers with obstructive sleep apnea pose to the safety of the public on our roads. Our truck accident attorneys review medical and personnel information on truck drivers who are the defendants in truck accident cases we have because there are federal and state safety rules. The dangers of sick truckers and truck drivers who are dangerously overweight and on medications or with obstructive sleep apnea are not hypothetical. They are very real.

Dr. Czeisler was one of several experts who presented on December 7, 2011 at this conference. He is a member of the Medical Expert Panel to FMCSA on obstructive sleep apnea. Keep in mind, medical groups have been making the case to the FMCSA to stiffen rule making and create guidelines for almost 30 years, because there is a clear correlation between overweight truck drivers with moderate to severe sleep apnea and increased truck accident risk to the public.

Dr. Czeisler said after the meeting: “It is actually a war zone out there.” He cited statistics for all drivers – not just truckers – showing that 20 percent of all crashes are related to drowsy driving, with two million drivers a week in the United States nodding off and falling asleep at the wheel. With fatalities related to drowsy driving occurring once every 70 minutes on average, “that’s equivalent to two 9/11 events every year,” he said.

So far, none of the group’s recommendations have been acted upon by FMCSA, and safety and medical experts such as Czeisler have scolded the FMCSA for its lack of action on the problem of obesity, obstructive sleep apnea, and the spike in likelihood of these truck drivers causing a truck accident.
After nearly 30 years of study and recommendations, these groups feel it time for the FMCSA to move forward to better protect these truckers and the public.

Czeisler recommended BMI of 30 or greater as a better ultimate screening requirement and would require drivers with moderate to severe apnea to be disqualified from driving until being treated and proving that treatment is working.

The December 7, 2011 meeting itself came after three separate safety groups authored proposals recently to tie truckers with obstructive sleep apnea to screenings based upon body mass index, and another such proposal emerged after this latest meeting. This latest proposal is supported by the FMCSA’s Motor Carrier Safety Advisory Committee and Medical Review Board, and would require medical examiners to refer any truck driver with a BMI (body mass index) of 35 or above for an obstructive sleep apnea evaluation.

A second guidance would immediately disqualify truck drivers meeting any of five criteria because of the increased risk they pose to the public of causing a serious truck accident:

2. Having had a truck accident associated with falling asleep.

3. Exhibiting apnea-hypopnea index (AHI) scores of 20 or greater until they’ve had
effective treatment.

4. Having had surgery to correct apnea and awaiting post-operative evaluation.

5. Individuals who have been found to be effectively noncompliant with their treatment.

The American Trucking Associations’ (ATA) Rob Abbott took issue with some of the data presented in the December 7 meeting.

As past president of the American Association for Justice truck accident attorney litigation group, I’ve written often about the ATA. The ATA seems far more concerned with protecting the industry than it is about addressing the staggering number of dangerous, out of service trucks on our roads (nearly one in four) and the 1 million to 2 million truck drivers under the influence of alcohol and illegal drugs.

Not to disappoint on their record of NOT protecting the public, here Abbott characterized some of the data’s potential to be inaccurate or misleading and in need of further study, and he stressed the need to “hash that out in a public comment period.”

If there is some good news here, it is that — after 30 years of study and now new attention being placed on the issue of healthy truckers from pieces like the New York Times article last month — eventually the entire issue will be put up for public comment.

Larry Minor from the FMCSA, said as much after the December 7, 2011 meeting. Groups like the American Truck Association can try to stall these measures at a terrible cost to the public in terms of wasted lives and crashes that could have been preventable. But it does appear that these commonsense safety measures are gaining momentum.

As I replied to Tom on November 29, and as I wrote in my truck accident lawyer blog on this topic, I am not anti-trucker and I am certainly not anti “fat-trucker” But I do wonder why trucking companies and the insurance companies that do safety audits of these companies are not cracking down, when there is so much correlative evidence that exists between obesity, sleep apnea and the increased risks of such a driver causing a serious – and preventable – truck accident.

Replies from Tom and truck drivers about what other drivers do around trucks, while true, also miss the point. Yes, some motorists will make poor driving decisions around trucks, as Tom points out. But it is precisely because we can expect this, because it is foreseeable, that we should also make sure that truckers are properly trained and that their safety directors are enforcing FMSCA rules that keep all drivers safe.

– Steven Gursten is a partner of Michigan Auto Law and one of the top truck attorneys in the country. He is past president of the American Association for Justice Truck Accident Litigation Group, and has received the top-reported jury verdict in Michigan for a truck accident case. Steve was named a Michigan Lawyers Weekly Leader in the Law for his work to promote national truck safety.

If truckers were healthier, there might be fewer truck accidents

Michigan Auto Law exclusively handles car accident, truck accident and motorcycle accident cases throughout the entire state of Michigan. We have offices in Farmington Hills, Sterling Heights, Ann Arbor, Grand Rapids and Detroit. Call (800) 777-0028 to speak with one of our truck attorneys today.