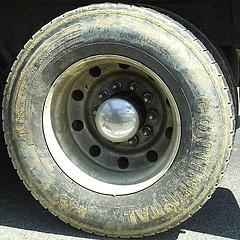 Yesterday, there was another fatal truck accident caused by a flying tire falling off a truck. Several people have died or been seriously injured from similar tires flying off trucks in recent weeks. Also yesterday, I was interviewed by Roop Raj from Fox Detroit WJBK News. I’ve been told that segments of our interview were on the 11:00 p.m. news last night and the morning news today.

There are a couple key points I was making.

Several people have lost their lives in recent weeks around Detroit from these accidents, but a tire falling off a truck and killing innocent people in traffic is no unforeseen “Act of God” type of event. An accident is when it is no one’s fault. But if the truck company has a proper maintenance and mechanical inspection program in place, and if the truck driver is doing a proper CDL pre-trip inspection before getting behind the wheel, it is very hard to imagine how this type of serious truck accident can happen.

I’m not saying that tires can’t blow out. But tire blow outs are predictable and foreseeable, and don’t cause devastating carnage. Drive along the freeway and you’ll see dozens of tire remnants from flats and tire blow outs. A tire blow out should not cause big commercial trucks to veer wildly out of control, causing death and injury if the truck itself is properly maintained.

In fact, in my interview with Roop Raj, we discussed a tragic case I handled two years ago called Nunez v, Utica Transit Mix. In this truck accident lawsuit, a wonderful man, a husband and father, was killed because the truck that killed him was in a defective and dangerous condition. This included a rusted, out-of-service steer column and unmaintained brakes that turned a preventable truck steer tire into a fatal and tragic death.

Roop and I discussed several other cases I currently have, including the case of James Fairley v. Schiber Truck and Mapes v. Hayball Transport (where the truck driver had 11 suspensions – before he nearly killed my client and left him in a coma for weeks).

The safety crisis posed by dangerous trucking companies in Michigan

What few people realize is the causes of truck accidents stem from the safety crisis posed by dangerous trucking companies and truck drivers on our roads today. I’ve written about this before, and I’ve testified before numerous hearings and safety groups as past president of the American Association for Justice Truck Accident Litigation Group.

I estimate approximately 200,000 truck drivers are currently driving under the influence of illegal drugs and alcohol. And the federal government has shown that 22 percent of trucks are in a defective, out-of-service condition during truck inspections – a terrifying figure. That is almost one in four trucks today.

That number becomes even scarier when you consider that trucking companies learn that the dates for these truck safety inspections (they are announced five months ahead of time), and less than 2 percent of trucks are ever inspected. Therefore, we can say that many more of the most dangerous trucks and truck drivers are deliberately kept off the roads during these three day Road Check inspections. Some private safety companies have put the real number of dangerous out-of-service trucks on our roads at 68 percent, based upon the truck safety inspections they perform.

Any good news? Not much. Last year, there was almost a 20 percent increase in drivers found falsifying the truth on their log books (which is why so many truck accident attorneys (and truckers) call them “lie books”). Truckers driving past the amount of regulated hours increases their likelihood of causing a truck crash accident by 2.5 percent, as well as impairing their judgment, perception and reaction times.

Oh, and there still are, according to the U.S. Government Accountability Office, more than 500 of the most dangerous trucking companies that have simply changed their names and are still open for business and driving on our roads. These are companies so dangerous, they were ordered shut down by the federal government. We call these “chameleon carriers.”

I don’t know if Roop Raj will play the entire interview, or follow-up with some of the real clients and cases we discussed. I don’t know what series of follow-up safety stories he will do about dangerous trucks as a result of our interview. But I do know one thing: this is not about the catastrophic injuries suffered by Jim Fairley or Michael Mapes, or the death of Patrick Nunez, or any of the other two dozen serious truck accident injury cases I’m currently handling. This is about a safety crisis where 5,000 people a year are killed, 15 people a day, and hundreds of thousands of lives are changed forever by truck accidents that in many cases are completely preventable.

I hope the light that was shed on the news yesterday and today may do some real good. If the public begins to understand the true nature of the safety epidemic out there involving so many of these big commercial trucks on our roads, hopefully more lives can be saved.